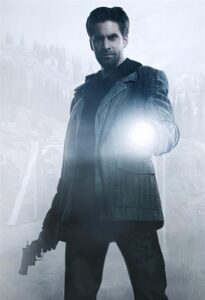 Chris J. Thompson put up a review of Bright Falls (update: no longer active) for Popculture Hound earlier this week. He’s got a lot of great things to say about the series, which if you’ll remember was originally planned to be little more than an advertisement for Alan Wake. Since it’s release, Bright Falls has earned a great deal of critical praise and even it’s own fanbase separate from those anticipating the game itself.

Chris offers up a sentiment I’ve been hearing with greater and greater frequency:

Based on the strength of the four episodes I’ve watched, the game itself has a lot to live up to! Bright Falls sets the bar very high indeed and it’s obvious they’ve invested a lot of time and money to make sure this project is done just right.

Video game “adaptations” have had a poor reputation for years. When it was announced that there would be a live action tie-in to help promote Alan Wake, very few had high hopes for the six part series. How ironic that now, for maybe the first time ever, people are asking if the video game can live up to the video game adaptation.

We’ll find out in just a few short days.